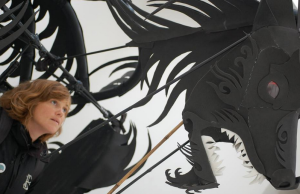 The focus of this month has been the Modo street parade The Red Eyed Dog Of Crookston. For five years I have been Modo’s designer and over that time we have tried to work as much visual excitement into their street parades as possible. The fun of a street parade is that it is an outdoor takeover and that anyone can be involved or come along as an audience member. They are all about spectacle (which people sometimes say is a bad word, but it’s what I love) and the performance and making workshops that lead up to a parade really benefit from the excitement that a big public event can generate. As more people get involved you can feel the anticipation building and the momentum becomes pretty intense. I enjoy working out colour schemes, parade designs, big builds, props, costume and puppets, using each element to build on the others and hopefully getting to a point where it becomes spectacular. I get to be in charge of everything visual so it’s a wonderful designey power trip. I was really bowled over the first time I saw a whole parade that I had designed and made, I’m not sure why but I couldn’t believe it. It’s a busy old job and last year I spent almost six months working on street parades across Scotland. 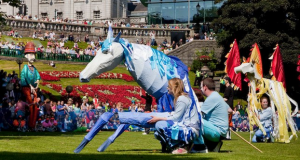 On this particular project I haven’t lead workshops like I usually would, I’ve been building a giant evil hound puppet which will lead the parade. Operated by five young folk from Modo’s circus group in Govan, the puppet had to be light weight, simple in operation and visually striking. Standard street puppets tend to be made from willow and wet strength tissue paper, with a bamboo skeleton and a fabric costume, based on old school lantern making techniques. Both Welfare State International and Bread And Puppet have very interesting 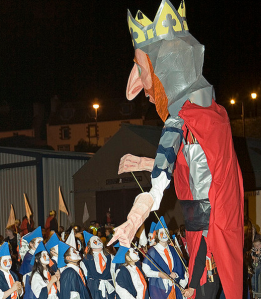 books on giant puppet making, and these were like bibles when I started. Now that I understand it all a bit better I enjoy trying different materials and techniques based on what movement and character the puppet should have in the end. The wind is a big problem with giant puppets, to combat this they often end up seriously rigid, which doesn’t help in bringing them to life. So I wondered about making something purposefully skeletal, using pipe lagging (that foam that plumbers wrap pipes in) to make shapes from, because it weighs almost nothing.

The hound puppet has a spine, shoulders and hips made from cane so there are solid points for support and articulation, then pipe lagging to build out the body shapes. In practice it was better than I’d hoped because it naturally makes very elegant curves. Glasgow Playschemes Association’s wonderful scrap store had some foam blocks for dead cheap so I carved them into legs and I refined the silhouette and added detail with plastazote, another bargain from GPA. This stage was a lot of fun, trying to create the illusion of a solid, bulky form using ideas from shadow puppetry. Last year I made the Phantom Stag for Streetland, a life-size deer operated by three performers, to see if I could work out how to

make a puppet like Handspring’s War Horses. It turned out fine, but there was a bit of a knack to working it. This time I took a standard street/circus animal puppet shape and build the simplest control mechanisms I could so that the young folk operating it had the best chance of making a natural performance with it. The aim with the articulation was to get fast scary movements, and a convincing prowl. The puppeteers will be clearly visible, dressed in red and there are red lights inside the frame of the puppets body and eyes. Hopefully it will be a bit like a sculpted shadow puppet, appearing out of the shadows and terrorising the children of Pollok.

The parade is tomorrow evening and the forecast is for torrential rain. Yeeha.