February has been busy for me. Which is partly why I put writing this blog off… too much. I’m going to talk about 4 different things –

1. TEAM EFFORT! Made a show for RIP IT UP! at Tramway in Glasgow. A meditation on ceremony and birds in it’s most loosest form. I found the process both freeing, frightening and frustrating. It’s been a long time since I’ve worked in such a collaborative, flexible, loose style. And I found that both liberating – because it felt so different to my daily life and also difficult because it felt so different to my daily life. For the first time in a long time I performed my own work – I solidity hated it. It’s not for me. I get stage fright and certainly I am not able to put outwardly what is going on inwardly. But I did love seeing more of my fellow collaborators practices. Decision making was a big part of that week. I stepped back from a lot of them as my usual nature is to charge in with my opinion… this wasn’t the space for it. My brooding, control-freak teenager had to be baby sat, though she occasionally came out in moments of huffs and boredom. I don’t want to deconstruct the time too much. It lived in a moment. Not much of what I do these days exists only in a moment. It’s usually a long process. One thing is for sure, it made me feel closer to my comrades, and maybe – for me – that was the point.

2. The second thing I want to talk briefly about was my visit to Instanbul. I won’t talk about this too much as I feel it might come up again in another blog. I went there with Theatre Uncut, invited by DOT (a Turkish theatre company). I didn’t know much about the state of politics in Turkey prior to my arrival, I left knowing a bit more but still entirely aware of the gaps in my knowledge. I loved it. I got to meet 4 incredible Turkish writers who spoke so eloquently about their country and the politics of it. Our hosts were generous and open and hopeful in a time where it would be easy to dismiss hope. To narrow what is happening in Turkey down to a sentence is so insulting and reductive that I don’t even know how write about what we discussed. But I’d encourage you to learn even a little about what happened in Gezi Park. What is happening now. The image below is a ‘famous’ image taken from the Gezi Park protests of ‘the woman in the red dress’ having tear gas sprayed on her from only 3 feet away. She just stood there. As I look at that image today I’m suddenly hit by the thought of how remarkable humans are, how truly awful they can be but also how truly remarkable they can be. 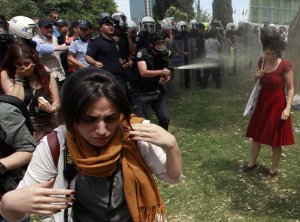 3. TEAM EFFORT! does London. We all went for a London. We got soaked by rain. We saw art. We all got a little angry from not finding a suitable place to eat. I had fabulous conversations with all of Team Effort. I fell in love with all a bit more. Once again, we existed in a moment of time. I’m so pleased we got to do that. I had underestimated how important that would be. It was odd to suddenly be in London having fun, talking art after learning about the violation of basic human rights that was happening only four plane hours away… It’s about balance I suppose. I don’t think I even quite got my head around those two trips being side-by-side but they were both important in totally different ways.

4. Finally. Below is a piece of writing that I submitted to a evening which took place on International Woman’s Day. I was delighted to be asked to take part but I also proceed with caution under the banner of anything that has ‘International Day of…’ in the title because in general these things should have more than one day. It’s been a full on few weeks for me, for us all. The world has felt like a very strange surreal place. So it felt right to end this blog with this slightly surreal piece of writing.

I wish you more wilderness. Sx

– It starts small
– Like most things
– It starts small
– But there is no sense of smallness
– I should mention that
– I should mention that I have walked from one beginning to the next
– And still I find no end
– I never felt small, I should say that
– Fists
– Hearts
– Heads
– Licked envelopes
– Marched on concrete
– Shouted until I coughed up blood
– A sad song plays in the background
– Slow weeping violins
– A snare drum trips over itself
– A glassy eyed woman stares off into the crowd
– One last kiss before I go
– It’s like that scene from Evita
– The one with the balcony
– Another suitcase
– Another hall
– Take my picture off the wall
– Madonna was awful in that film
– Awful
– Fists
– Hearts
– Heads
– We chain smoked in the center of Red Square
– Stood with coffee cups in our hands in a side street of Kiev
– Dodged tear gas in Gezi Park
– Bandaged limbs in Caracas
– Held a young girl’s hand in Cape Town as her test came back positive
– Picked up abandoned baby girls in Tiananmen Square
– Or not
– Or not
– We don’t have to do that
– If we don’t want - That is the prize we get for our genetics
– Better run
– Better run
– Because I do believe
– Believe in things
– I definitely believe in things
– I believe in my right to masturbate while I listen to gangster rap
– I find Snoop Dogg’s voice very alluring
– I believe in my right to dislike my children
– I believe in my right to hate lyrca
– It’s an unforgiving fabric
– I believe in my right to wear Croc’s instead of heels
– I believe in my right to a revolution
– You better run
– Run
– Run
– Run
– I will be the hopeful
– I will be the change
– I’ve bought stocks in moon-cups
– Last Christmas I gave everyone a copy of Caitlin Moran
– I donate to charity
– That charity for the mixed race one armed Islamic bisexuals
– I donate what I can and eat corn fed free-range chicken
– It’s never been so easy to change
– It’s never been so hard to see
– Run
– Run
– Run
– I take myself out on dates and try to fall back in love with myself
– With my hips
– My chest
– My love of carbohydrates
– And distinct addiction to bikini waxes
– But it turns out my date is a drunk and cries after 3 glasses of chardonnay
– I love chardonnay
– But I hate this city
– There is an ex on every corner marking the spot of a person and a place I could not fix
– Big ideas.
– And little me standing on the corner of a city that gives me enough choice to pacify my left hand while still shaking the right
– So you better run
– Run
– Run
– Run
– Because as I travel coasts and continents through snow and over shores
– I now know this to be true
– I may not have much family
– But I’ve got billions of sisters
– Using both hands to press down on the wound of fifty thousand years of being the second thought
– So let us take to the street
– Women wearing shirts from the men’s section of Marks and Spencer’s
– Women with enough children to start an Osmond’s tribute band
– Women who marry other women
– Women in head scarfs
– Woman who have male on their birth certificates
– Women who aren’t quite like the women the world would like us to be
– But liking ‘the me’ is the best thing I’ve got - Understanding the fact that the binary, is not helpful
– This isn’t us and them
– It’s not just me and you
– It’s not just a bad cover of Tracy Chapman’s Fast Car
– Because economic advancement is not human progress
– Progress
– Progression
– In the very moment you are in
– Because you’ve got one foot in the past
– And one foot in the future
– You’re going to end up pissing on the present.
– RuPaul said that - And he is a drag queen and a better woman than I will ever be
– Whatever that means
– Whatever that means
– This hierarchy
– This man-made system
– There are no simple solutions
– Alt, Control, Delete
– Reset
– It’s a circle
– It’s one thing feeding into the next
– So you better run
– Run
– A glassy eyed woman stares off into the crowd
– The center of Red Square
– A side street of Kiev
– Gezi Park
– Caracas
– Cape Town
– Tiananmen Square
– Traverse Two
– Because we deserve better.
– We deserve better than this.
– We deserve better than one day a year.
– I have walked from one beginning to the next
– And still I find no end
– Still I find no end.

*this piece of writing may not be republished outwith this blog, without the permission of Stef Smith